Dr. Linton Wells II is an American public servant and educator with over 50 years in government service. He served 26 years in the United States Navy as an officer, and then was appointed by the White House as the Principal Deputy Assistant Secretary of Defense, serving through two administrations of both parties, both the Democrat Bill Clinton and the Republican George W. Bush.

He wrote many books, articles, and white papers on matters of national security, including important texts related to the use of American military capabilities in global humanitarian operations. His expertise focused on the strategic impacts of technological change and on building resilience to natural and man-made disasters as issues of US national security. He shaped, over five decades of public service, current US Department of Defense directives that link policy and technology with public-private cooperation.

After retiring from public service, he continued to contribute to the international STAR-TIDES network that he had founded in 2007, a consortium of several thousand global nodes comprising agencies, organizations, institutions and individuals in 40+ countries that promote the free exchange of research results on global issues of human security. As of 2019 he is Executive Advisor to the Center for Resilient and Sustainable Communities (C-RASC) at George Mason University and chairs the Advisory Group of the C4I and Cyber Center there. C-RASC has been working with the People-Centered Internet (PCI) on ways to “put humanity at the center of the Internet” and support a variety of revitalization initiatives. He is also the President and CEO of Global Resilience Strategies and Senior Advisor to Resilience Japan. He was listed by Fortune magazine in 2009 as one of the top 16 “Players of Tech”. 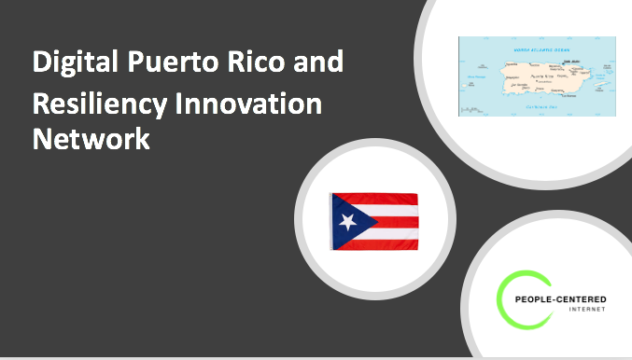 In 2018, following the devastation of hurricanes Irma and Maria in Puerto Rico, People-Centered Internet fielded a team of experts, working with the RAND Corporation, to offer recommendations for leveraging the Internet for the archipelago’s recovery plan. This initiative followed extensive disaster response work by PCI community member, Melvin Cordova, through his “Project Coqui.” PCI team members — including Marci Harris, Mei Lin Fung, and Lin Wells — traveled multiple times to Puerto Rico to engage with local business leaders, innovators, academics, and policymakers. They also participated in a knowledge-exchange trip, organized by Mei Lin Fung, for leaders from Puerto Rico to visit Singapore and engage with their counterparts in business, government, and academia to learn from Singapore’s post-colonial transformation. PCI’s work culminated in 11 recommendations (courses of action or “COAs”) for leveraging federal programs and private resources for Puerto Rico’s recovery and were included in the plan submitted to Congress.

Press Release — January 1, 2020 PALO ALTO, CA — People-Centered Internet (PCI)today is announcing the appointment of a new board chair and the addition of a new member to its Board of Directors: PCI cofounder, Mei Lin Fung, begins her term as board chair on January 1, 2020, stepping into the role previously held by By Dr. Linton Wells II, Executive Advisor to the Community Resilience Lab at George Mason University and President of Global Resilience Strategies The People-Centered Internet’s (PCI) aim  is to “put humanity at the center of the Internet”, and a large part of this objective includes, “Providing support and expertise for projects that demonstrably improve people’s

PCI has been collaborating with Dr. Linton Wells II, Executive Advisor for the Center of Excellence in Command, Control, Communications, Computing, Intelligence and Cyber at George Mason University. He is the former Director of the Center for Technology and National Security Policy (CTNSP) at National Defense University (NDU), and the founder of the TIDES Project.

By Mei Lin Fung Following our work thinking about Digital Puerto Rico, People-Centered Internet’s RAND Corporation project team leader Marci Harris and team members Linton Wells and Mei Lin Fung accompanied a delegation from Puerto Rico.  This visit to Singapore had already been in planning before the devastation wrecked by Hurricanes Irma and Maria, and was set