A once-in-a-lifetime opportunity to show the Internet can be more people-centered & give people the opportunity to improve their own lives
Press Release: Aug 24, 2017 08:00 PDT 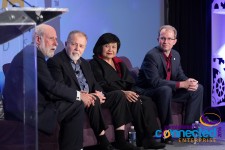 The People-Centered Internet coalition announces the selection of Dr. David Bray as the new Executive Director to start in late September 2017. The PCI coalition seeks to recognize and aid global projects that measurably improve people’s lives through community-based use of the Internet.

PCI Chairman and Co-Founder Vint Cerf celebrated this announcement noting “David brings to our coalition several years as a leader, executive, and positive change agent working with divergent communities to build focused narratives and shared goals. He has served in challenging environments and we look forward to him working with the People-Centered Internet’s Board.”

PCI Co-Founder Mei Lin Fung, who also serves as Vice Chair of the Internet Inclusion IEEE sub-committee, added: “In his Eisenhower Fellow capacity to Australia and Taiwan, David has been involved with PCI and seen the coalition evolve from concept to mobilized volunteers. His vision of exponential change and his talent at encouraging networked teams to deliver positive results environments will help our coalition gather additional momentum.”

David Bray brings to our coalition several years as a leader, executive, and positive change agent working with divergent communities to build focused narratives and shared goals. He has served in challenging environments and we look forward to him working with the People-Centered Internet’s Board.
– Vint Cerf, Chairman and co-Founder, People Centered Internet

David’s background includes serving as the IT Chief for the CDC’s Bioterrorism Preparedness and Response Program during 9/11, private sector work with both Microsoft and Yahoo!, volunteering in Afghanistan in 2009 to help “think differently” about military and humanitarian efforts in the region, Executive Director for a bipartisan National Commission, and most recently as the nonpartisan CIO for the FCC recognized with the global CIO 100 award in 2015 and 2017.

“Vint and I were at the Data Summit in Dublin in June when I found out about the potential adoption,” said David. “Since then, for both my wife and I, our lives have changed in several good ways. While I had previously planned to start a different government role this summer, the opportunity to join the People-Centered Internet coalition as Executive Director represents a once-in-a-lifetime opportunity to work with the tremendous PCI Board and Team to advocate, share expertise, and identify projects to demonstrate how the internet can be more people-centered.”

People-Centered Internet is an international coalition created to connect the dots, fill in the gaps, and unite communities through the internet. David will start as the new Executive Director after a few more weeks of family leave and he leaves his current position.

Founded and chaired by Vint Cerf, the Internet’s co-inventor and architect, PCI is central to activating international commitments to make sure the Internet reaches everyone. Last year $20 billion was committed to rolling out Internet access for all. PCI’s allies include World Economic Forum, World Bank, IEEE, IFLA and the Internet Society. With its allies, PCI is developing a global impact framework of networked communities who share breakthroughs and benefits quickly. Building up from local community-based projects, PCI is set up to recognize and award global projects that measurably improve people’s lives and livelihoods using the Internet.